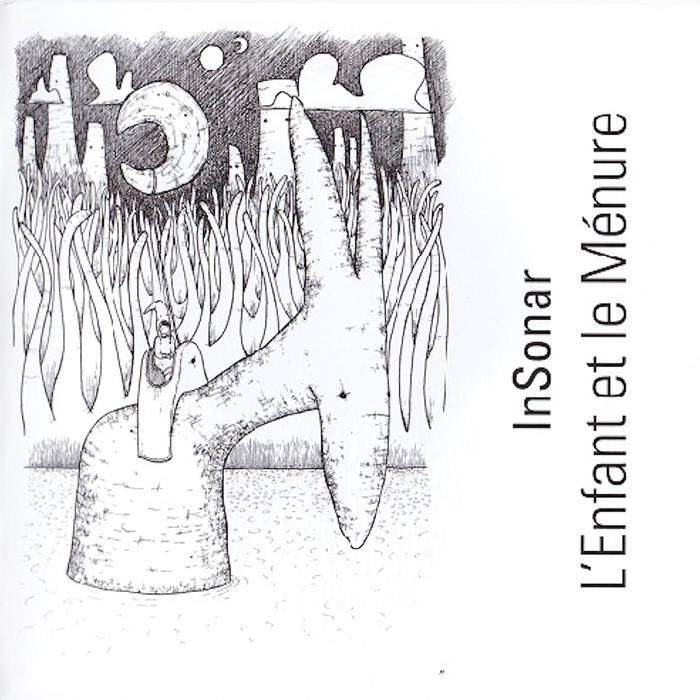 62 musicians from 5 continents.
This work that refers to the idea of ​​"itai doshin" (different bodies, same mind), was conceived with the moniker InSonar (Claudio Milano & Marco Tuppo).

It shows the extreme possibilities offered by networking.
Starting from the desire to investigate all the possibilities offered by the human voice, electronics and musical instruments of all kinds and latitudes (including 12 theremin players and Thomas Bloch at Onde Martenot), complete freedom was given to the musicians involved, who responded with an unexpected enthusiasm.
The lyrics of CD 1 speak of the ability of children to transform horror into wonder.
The second CD has the theme "the journey" (mental and physical).

Legends of rock, pop, jazz, classical, ethnic and electronic music, from different corners of the planet, engraved with genuine enthusiasm, after listening to the original songs for voice and electronics.

The duo began their collaboration with "Red Submarine", track included in Liir bu Fer's "3 juno" (ZEIT CD 003 - 2011) and with an alternate take on "Neve Sporca" (SCR07CD 2013). A second act of the project was the recording of "Gallia" and "Plaisir d'Amour", both on Pierrot Lunaire's "TRE" (MPRCD0063).
Together with "L'Enfant et le Ménure", a collector's item CD called "Neve Sporca" was published. It contains unreleased, alternate takes, live versions
On December 16, 2015, a new track was released. It was called "Nyama" and was published for electronics only with some sparse vocal contributions on Alfa Neu's "Introducing Mr K" (Drummond Records ‎– DSP 011). This track, credited as InSonar, in the form of an extended version, was published online in 2016. "Nyama", in a completely different form, will be part of NichelOdeon / InSonar & Relatives first album, called "INCIDENTI".
Few were the concerts of the project, one only with Marco Tuppo (feat. Walter Calloni, Vincenzo Zitello, Lorenzo Sempio, Stefano Ferrian, Andrea Quattrini, Francesco Chiapperini, the dancers Andrea Butera & Ines Ambrosini), the others with Raoul Moretti and Luca Milano.